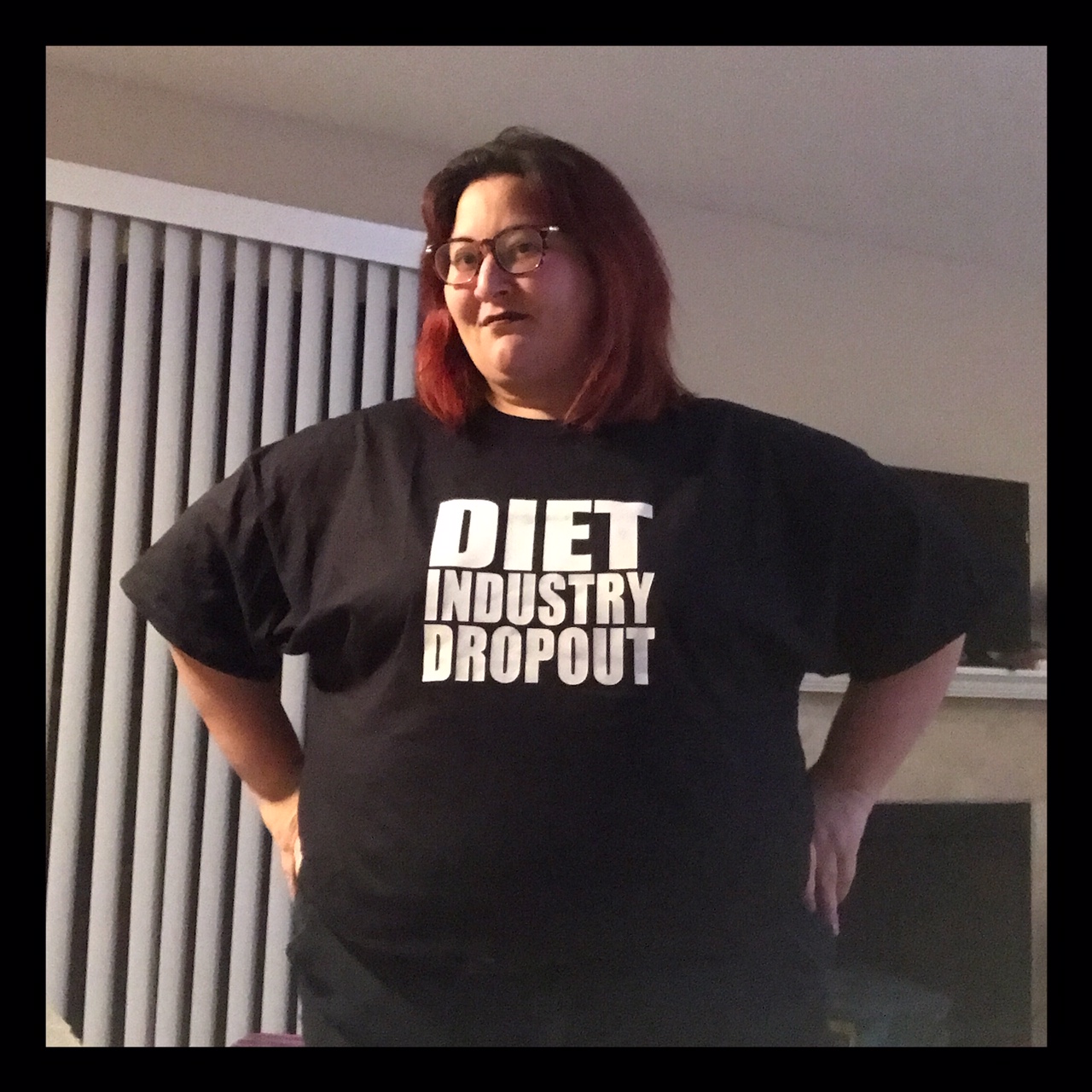 I am fat, and I have been fat since elementary school. Being fat was very isolating for a very long time. Fat and lonely were almost inextricable, it seemed. Sure, I had friends, but they weren’t fat like me. They couldn’t relate to my lived experience of being fat, no matter how much they loved me.

I found the fat acceptance movement in my late 20’s and early 30’s after years of being on the diet carousel and gaining back weight and then some (a very normal narrative). My identity as a feminist began to form around the same time, and fat and feminism have been fused in my experience.

Honestly, I don’t remember a light-bulb moment of how or exactly when I stumbled into awareness of the fat acceptance movement. It was then and is now a revelation: people with similar life experience transforming their lives by dropping out of diet culture (buy this awesome Diet Culture Dropout t-shirt from Chubby Cartwheels!) and choosing to embrace their bodies and live in the present and proclaiming that fat people are worthy of dignity and respect and equal treatment.

These three facts were essential lessons in moving from diet culture to fat acceptance and fat positivity:

Once I learned these basic, seemingly obvious facts, I was done with diet culture. I ditched the scale entirely, including either refusing to be weighed at the doctor or choosing to face away from the numbers. Feel free to check out this recent article/interview with an author who wrote a book on the above points.

Eventually, I worked on my dieting-induced disordered eating habits through therapy. I also worked with the Fat Nutritionist for several months to build more consistent habits with things like grocery shopping and food preparation.

I read what I could about the history of the Fat Acceptance movement. I digested blogs by authors including Ragen Chastain. I followed other fat people and body image activists on Twitter. I began to advocate in life and on social media that all bodies are good bodies. I found Jeanette DePatie’s (The Fat Chick Sings, Every Body Can Exercise) movement classes nearby where I lived in Southern California and started attending. (They still happen, usually Tuesday and Saturday, in Duarte, CA!) I joined fat positive Facebook groups. All that, but I was still feeling the absence of community.

I realized that I was ready to leave L.A. and I set my heart on the Pacific Northwest (PNW). To facilitate that, first I had to move back to Central California to finish the last two years of bankruptcy payments and start saving money for the big move. Returning to Central California was a culture shock. I had been away long enough to forget how conservative the area was (and is). It was a tough two years, but during that time I continued to participate in online community. I also took two vacations, one to Seattle and one to Portland, and both were fantastic.

I chose to move to Portland for three reasons: the climate, the trees, and the presence of existing fat positive community, which I’d seen evidenced online in Fat Girls Hiking, Chunky Dunk, Fat Fancy, and Body Love Yoga.

In July 2017, I made a trip to Portland and found an apartment, which happened to be at the last place I had wandered by in my rental search during the vacation in 2016.  I moved in August 2017 and haven’t regretted it for even a moment.

The fat community here is a work in progress, but it is in progress. In the past year and change, I’ve gone hiking and tried boxing and went camping with Fat Girls Hiking, gone to fat positive yoga with Anna Louise Chapman of Body Love Yoga, gone to two of three Chunky Dunks, gone to body positive weightlifting classes, gone to a podcast discussion meetup, and that’s not even an exhaustive list. I’ve made fat friends who are into fat positivity and fat acceptance and community building. I’ve met in real life fat positive folks I follow online. And still, there’s plenty of room to build even here in PDX.

I’m happier than I’ve ever been and I’m so grateful to be here in the PDX area and to know like-minded folks with similar lived experience. I’m looking forward to all the possibilities, and I hope that this little site can grow and help support other fat people looking for acceptance and community. Feel free to reach out via my Contact page or email me at fatpositivecooperative@gmail.com. You can also follow me on twitter @fatpositivecoop.