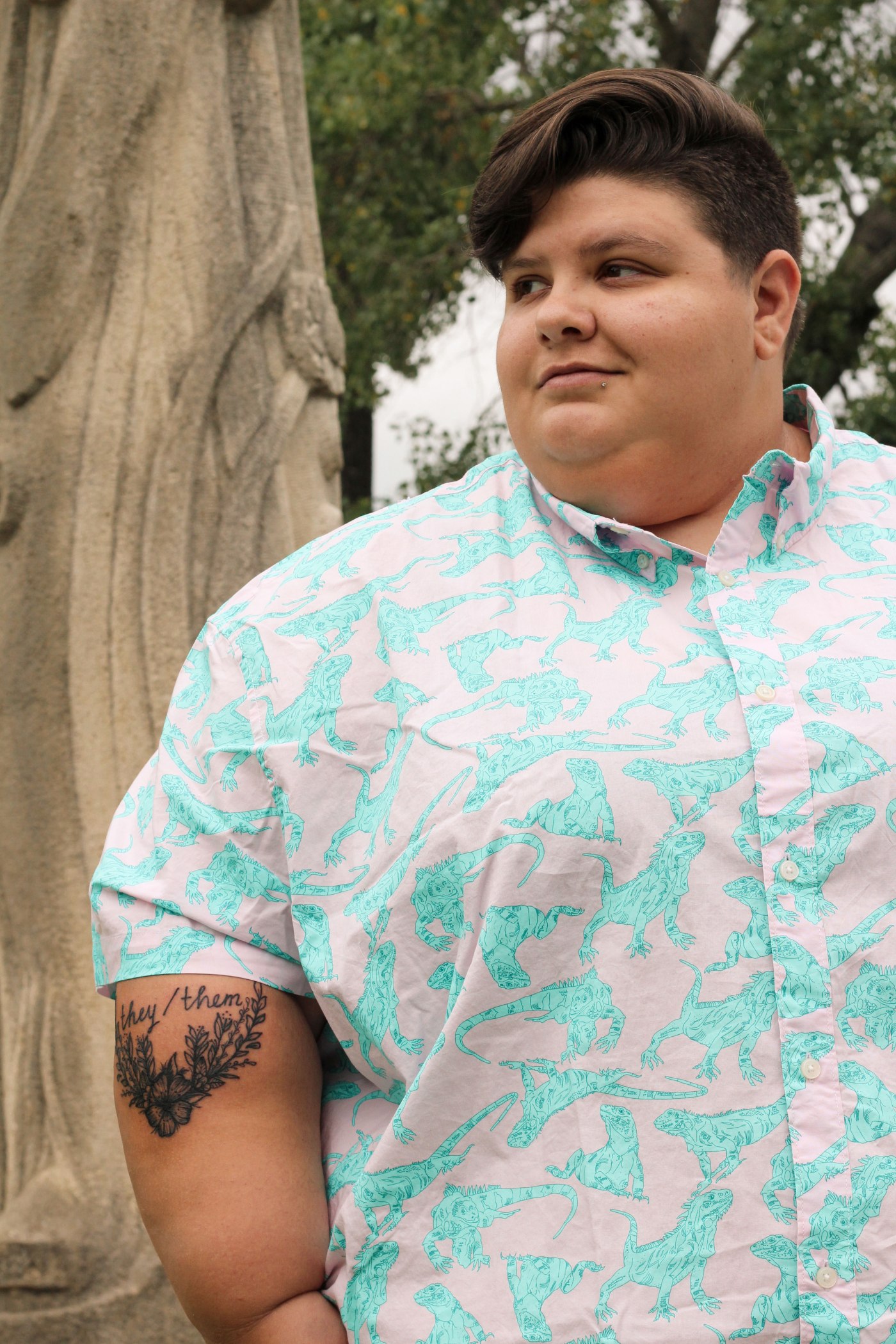 Being nonbinary and using they/them pronouns has proven to be difficult in my move to the Midwest. It seems that everyone reads my body as female. It’s not out of malintent, more so it would seem that it’s habit. To folks around here, certain body types, and body parts, are clues to gender, a choice between two: male and female. I don’t think this is a problem unique to the Midwest, but more of an example of how Western culture defines gender and how, while there are pockets of communities who understand nonbinary gender identities as if it were old hat, the general public still has a long way to go.

I grew up in Western Massachusetts, in a tiny progressive community full of queer and trans people. I’d go so far as to say the area is heavy in activism, focusing on intersectional feminism, reproductive rights, disability rights, LGBTQ advocacy, etc. This bubble is such a special place to me; it’s where I learned that it was okay to explore gender and sexuality. It’s the reason I was able to feel safe enough to try gender neutral pronouns for the first time – at work – and be received with complete support. Having grown up in this magical bubble was a privilege.

I wouldn’t say that in Massachusetts I was never misgendered or read as female, though it was much more often that I was read as potentially gender neutral. I knew lots of nonbinary and genderqueer people and it wasn’t unheard of to ask that folks use neutral language when referring to me. Once a love came into my life that motivated me to move to the heartland of the U.S., I knew I’d have to come up with some serious problem-solving skills around feeling validated in my gender identity.

There is no one specific “look” to being nonbinary. Anyone, of any gender presentation, could be nonbinary. In a way, my masculinity has served as quite the privilege for a long time, working in tandem with the societal narrative around androgyny. For a very long time, androgyny has been represented by people who were assigned female at birth who are masculine, thin, white, and able bodied. Androgyny by this definition then became the quick connotation of nonbinary gender identities. This is why I think I’ve found security in that privilege. It has been nice to feel like the way I present physically has been a hint to others to use gender neutral language for me. My backwards snapbacks and button down shirts served a purpose. They’ve been an exclamation of my pride as a masculine nonbinary babe.

And then I moved to Kansas. I live in a beautiful city, so progressive that I forget I’m in in Kansas. I love it here. I’ve met some truly beautiful people who validate my gender with the use of my neutral pronouns at every opportunity. I’m not at a loss for a support system. But the moment I step outside of this circle, I’m faced with multiple encounters of what feels like severe gendering at nearly every sight of a human.

“Can I help you ladies find anything?” as we browse a thrift store.

“Coffee for you ladies?” asks our server at our favorite brunch spot.

“Girl, let me cut that hair for you,” my gay barber says playfully.

It’s difficult to describe the feeling I get when this happens. Part of me wants to shout at people, “I’M NOT A GIRL!” at the top of my lungs. I also want to cry. Why don’t they see me? What more can I do to show them who I am? How can I make myself look more androgynous? I don’t care to bind my chest much, until I feel like the world is using my breasts as a gender identifier associated with femaleness.

The thing is, I truly believe that if I were thin, it would be easier to lean into the androgyny stereotype and at some moments, I care more about leaning into the easy way of feeling seen than educating people every time I leave my house. My fat body has curves, rolls, big breasts. My voice is soft, gentle, and higher pitched. The public doesn’t question what those attributes mean. It doesn’t occur to them that there could be another possibility. They’ve taken my autonomy from me without even knowing it.

It had grown exhausting trying to figure out how to navigate this situation I’m coming up against every time I leave my house. How do I have a conversation about the basics of gender, nonbinary identities, and pronouns with strangers that I pass on my way into the movie theater? How do I correct folks in a way that still allows me to feel safe? How do I take the power back and alleviate some of the responsibility that’s been put on my friends and my partner when I choke up and don’t know how to address being misgendered in the moment?

This is why I created “You Misgendered Me” cards. They are business cards that brings the topic of misgendering strangers/customers to people’s attention and gently encourages them to use neutral language instead. I wanted something non-confrontational, something I could hand to someone in conversation or leave it on the table once I left. So, my partner and I created Pronoun Packs that include the “You Misgendered Me” cards. I want others to feel this empowerment. They give me the opportunity to take back my autonomy. I can correct someone, educate them in a simple way, and still feel safe. I have the freedom to self govern what my body means and what my gender is. That power is truly unmistakable.

It’s hard to say if these cards have made an impact on anyone reading them. I’d have to do a follow up survey or something to gather that kind of information. But it’s not really about other people, is it? These cards serve a purpose for me. They serve a purpose for anyone else who feels powerless at the hands of a society still learning about gender.

I stuff these “You Misgendered Me” cards in my wallet, a few in my jacket pockets. When I leave a card behind at a restaurant, I feel like I’m on a high. I feel confident in my being. I feel strong and resolute in my identity. I’m not concerned with simply being palatable to the world anymore. They can learn and grow. I truly believe that.

J is a trans, nonbinary, fat activist and the founder of Comfyfat.com. They write about accessibility topics and share resources with their community to help make life more comfortable for plus size folks. J lives in the midwest with their partner Corissa of Fat Girl Flow and their two loving, yet incredibly rowdy pups, Petunia and Taco.